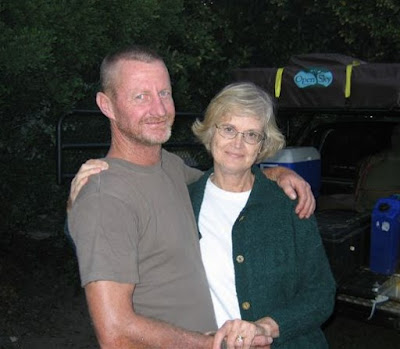 Mom would have celebrated her 77th birthday today.
My late Mom, Maureen Kemp, and my late brother, Rodney  (Rusty) Kemp. 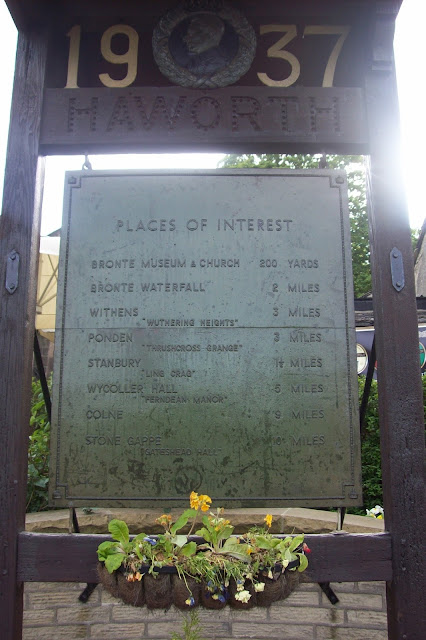 Every year Howarth celebrates the 1940's with a tribute weekend.  It usually falls on the same weekend as my birthday and its very special treat to be able to spend the day enjoying the festivities along with hundreds of other visitors and many dressed in period clothing. 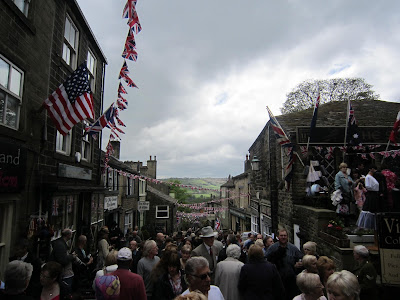 Howarth is a lovely, quaint, Yorkshire town where the Bronte sisters also grew up.  Its one of those villages that you can go back to time and again and every time you'll see something else you missed the first time. 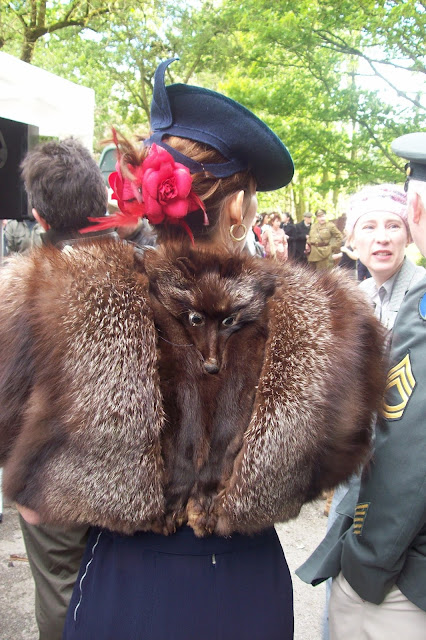 There are many fox stoles (spelling?) still worn on these special occasions, together with ladies wearing stockings with the seam up the back, ruby red lips, hair beautifully coiffed and then others in Land Girl dungarees and boots. 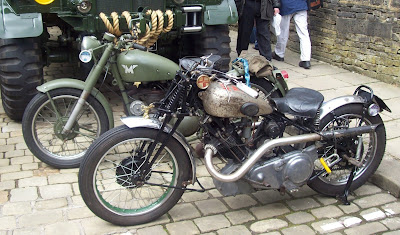 Some of my photo's in this post are from previous years (2009 and 2013) but it would be unfair not to show a little of everything. 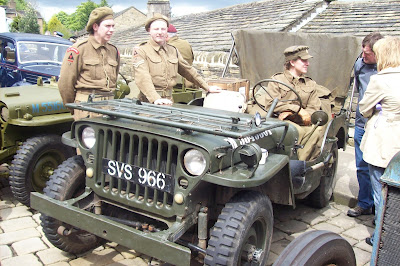 The villagers take great pride in keeping it clean, beautifully planted with spring flowering plants.  The high street and surrounding roads are well maintained, which is just as well because there are many (hundreds/thousands) of pedestrians that visit over the weekend. 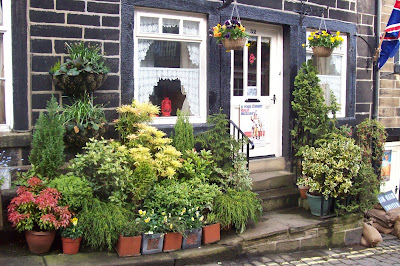 We got to eat yummy street food as the cafe's and pubs were absolutely full of people resting their feet while enjoying a well deserve drink and a bite to eat. 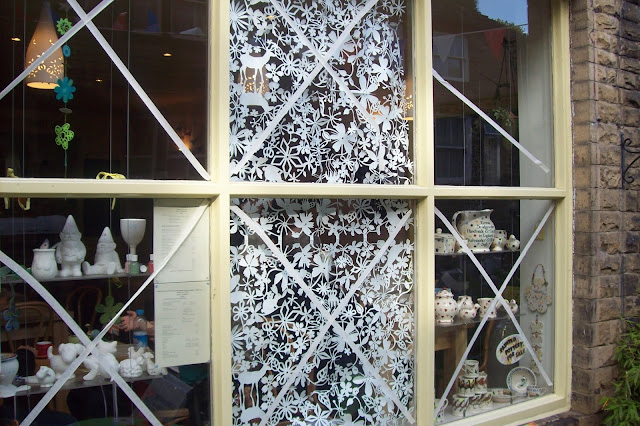 I've enlarged this picture to show the paper cut out 'curtain/blind' in this shops window.  It's awesome and I'd love to know how it was done.

This post is already photo heavy so I won't add any more, but would highly recommend a visit and also suggest that you pop in at the Bronte parsonage (museum) and see first hand the conditions they lived in, the teeny tiny handwriting in the books and their dresses with really narrow waists.

Email ThisBlogThis!Share to TwitterShare to FacebookShare to Pinterest
Labels: Days out, Haworth 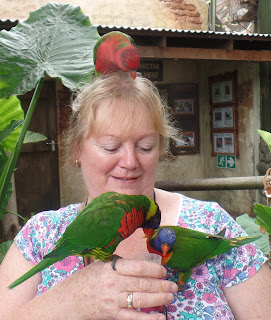 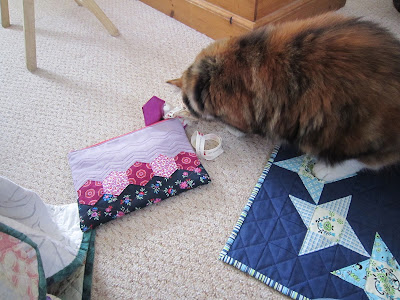 Posted by Down the Avenue at 08:00 No comments:

One metre of lace = refashion 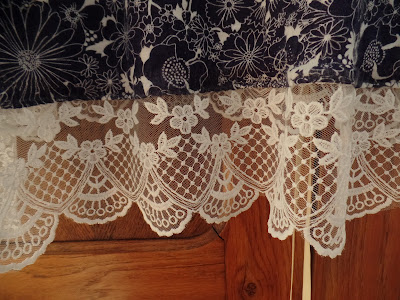 Yip, that's all it took - only 1 metre of lace.  This t-shirt had an elasticated waist, which, at the time I thought would be great but in practice it kept riding up.  When you are tall with a long torso like me, it's a pain in the derrier to have to keep on pulling your top down.  In the long run it meant that this t-shirt, which I really like, would end up in the charity shop donation bag. 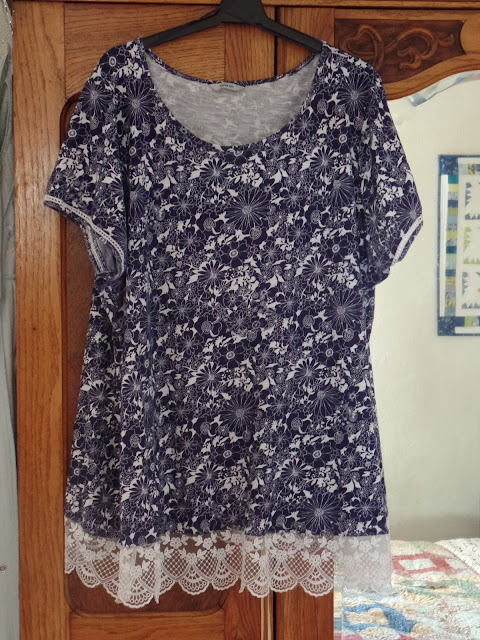 Instead, voila!  It took about half an hour to unpick the elastic, pin on the lace and stitch it down.  It's lengthened the top and revealed a slight A-line shaping which is proving to be flattering on my not-so-slim figure.

Yay for a successfull tweak! 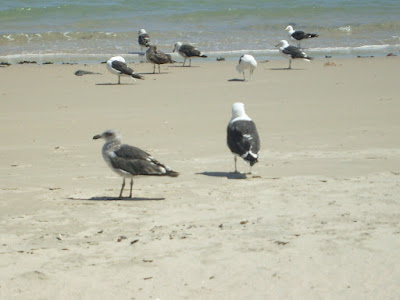 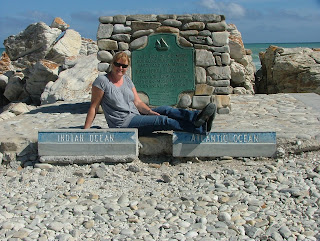 The most southerly point in South Africa where the two oceans meet.

One of the tasks of sorting through Moms effects was sorting her sewing room.  She has / had many projects on the go and I'll show some of these as I unpack the packages that I've shipped from South Africa to Yorkshire - when they eventually arrive.

I have benefited so much in inheriting good scissors, needles, a few finished projects, a completed tapestry that is not mounted, many amazing sewing, patchwork and other craft books and magazines, as well as some unfinished projects. 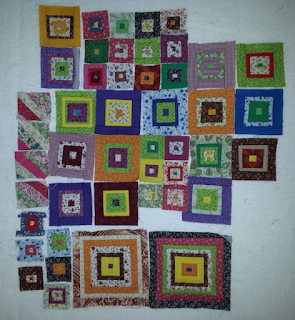 Mom had all her wip's and crafty stash sorted into labelled ice cream containers.  Amongst these was one unlabelled ice cream (project) container.  When I opened it I found this assortment of blocks and a small pile of fabrics.  The smallest blocks measure just under 2 inches, the middle sized blocks are 3 1/2 inches, the two big ones measure 6 1/2 inches and those four stripy ones measure 2 1/2 x 2 3/4 inches.   Unfortunately there were no notes to indicate what she had in mind but I will play around with them and hopefully find a layout that would make a pleasing mini wall hanging or maybe 2 placemats.  They're not my colours but they are scrappy and that's good enough for me.

Edit:  I originally posted this on 4th January from my android mobile using the Blogger app.  Well it got stuck while 'saving' and I couldn't get it back no matter what I tried.  It also caused my blog to freeze somehow and only after googling this problem today, and finding some ways that have been put forward to mend the problem, was I able to fix the problem.  Hopefully it won't happen again. 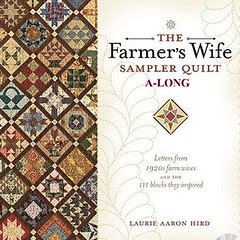 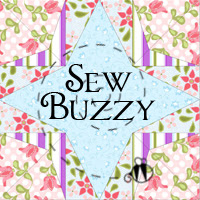 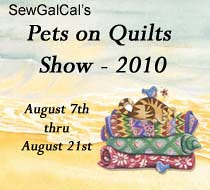