Since the last quarter of 2012 I've been lucky enough to be one of a group of 12 international quilters enjoying making blocks for each other each month.  The Bee is named Sew Buzzy and February 2013 is my turn to ask the others to sew a block for me. 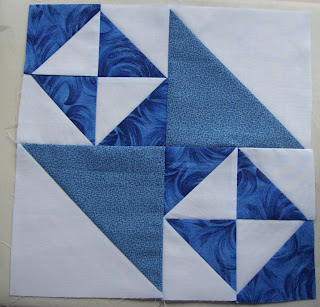 This was the first block we made.  It was fun, quick and easy. 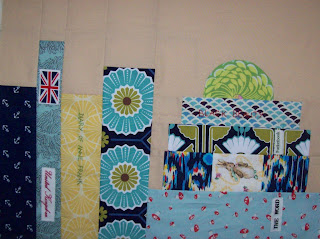 Then we were asked to make this style of block, resembling books on a bookshelf.  Most of us added nick nacks or ornaments.  The names of the books, embroidered or sewn onto the spines of the books are some of my favourites from when I was a young girl. 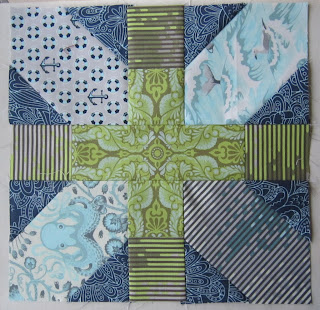 For January Ursi asked us to make the plus times block and sent us some Tula Pink fabric to use.  Oh my goodness it is just the most fabulous design and colour scheme.  Again, I thoroughly enjoyed fussy cutting the fabric and making a block that pleased the eye. 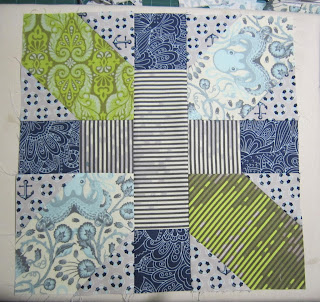 There was enough fabric left over to make a second block and so I did.  The fabric made me do it ..... it really is such fun fabric.

So, knowing that February is my turn I looked at the long list of bookmarked favourite blocks and had to make a decision as to which one would be best suitable for my fabric 'collection' and for a group quilt.  What appealed to me the most was this quilt made using a quilt block pattern by Anna Maria Horner called Spinning Stars which you can find here and there is a Flickr group that was started last year for a Spinning Stars Quilt along if you want to have a look at some of the other quilters blocks and quilts. 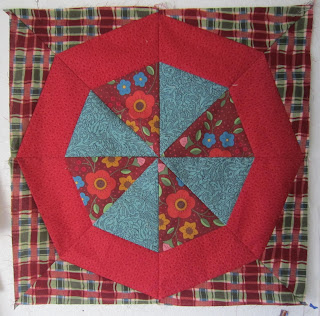 I made a test block because I was worried about all the points meeting in the middle.  A very clever quilter told me to sew the seam from the outside edge up to 1/4 inch from the middle point seam.  So I did.  I prefer to lay the seams to one side rather then open them up.  Then when all the bits were sewn together I did have problems ending up with it sticking up like a circus tent in the middle and not lying flat. 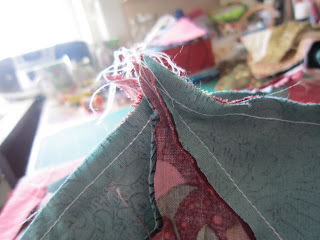 After unpicking the block so that I had it in four quarters I repressed each quarter with the seams pressed toward the floral fabric and trimmed the rabbit ears off the centre points.  Then I sewed two sets of quarters together so that the block was now two half pieces.  I made sure that the join in the centre had no ears.  Then I laid the two halves together facing each other and sewed it together.  This time, when I opened it up it lay nice and flat. 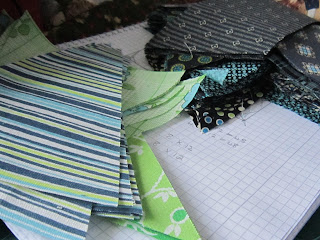 Confident that it is a managable block I got out the blue/green collection of Denyse Schmidt fabrics, started cutting and laid them out on top of the bed to make sure I've got the mix right. 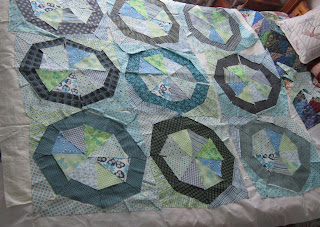 This picture shows 9 spinning wheels whereas the finished quilt will hopefully be 3 rows of  4 blocks = 12 blocks in total.  Each block finishes at 18" resulting in a respectable 54" x 72" size quilt.

Edit:  In the daylight tomorrow I'll sew my block and take photo's as I go, then I'll be able to show you what I mean.

Email ThisBlogThis!Share to TwitterShare to FacebookShare to Pinterest
Labels: patchwork and quilting