A lesson in modern quilts

You will remember that I showed my mini quilt for the Brit Quilt Mini Swap that is currently taking place.  At the beginning we were all asked to create a mosaic of elements and quilts we liked which would give our prospective partners clues and inspiration.   One of the quilters put up a mosaic that had a modern city quilt in it.  At the time I made a mental note to try make a miniature version when I had nothing else on my to-do list. 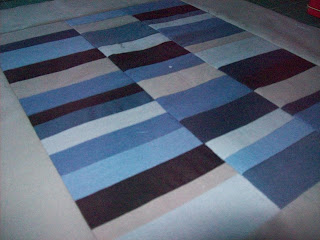 I've never knowingly made a 'modern' quilt and thought it was time to change that.  That day when I went to The Skep I also selected some solids and during a lull in chores I went cutting and sewing and ended up with a piece that I didn't know was right or wrong.  Either way, I auditioned black and shades of blue and grey as borders. 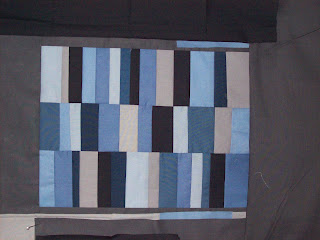 The one I chose was too dark, well I thought so anyway, and so it was unsewed and I put a lighter shade on.  Then I decided to put a picture of it on Flickr and ask those in the know how to quilt it.  Bless their hearts, in no time I had comments saying :

*...quilt it across in lots of close together lines...
*... lots of straight line quilting with smallish gaps between, maybe in different sizes ranging from quarter inch to inches randomly...
*... to stick with the modern min concept its gotta be the straight lines tightly packed... 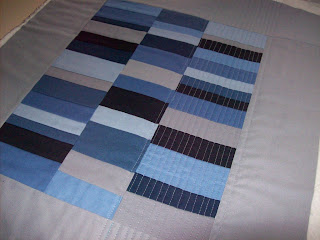 Off I went, up the stairs, popped a CD in the player and started sewing straight lines.  It is surprising how long it takes to sew a bunch of straight lines! 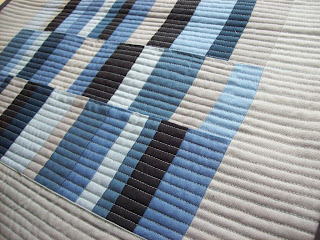 2 hours later and they're all done.  Time for the binding ... had to use a different shade of grey as I'd run out of the other one. 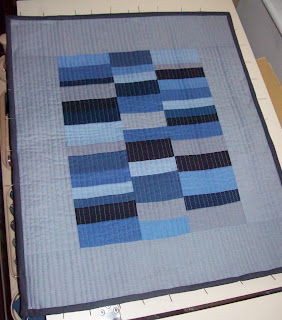 The binding will be all done by bedtime.  I'm really quite pleased with the result and am very grateful to those that told me to do it this way.

On that note, Bye for now

Email ThisBlogThis!Share to TwitterShare to FacebookShare to Pinterest
Labels: patchwork and quilting