Round one with Border Agency

Ahaa, you think, what on earth is she up to now?  No, I'm not in trouble with immigration.  It's all about another new beginning, namely, the centre block that is set to travel around the UK visiting the other members of the UK Border Agency Quilting Bee.  Clever name hey.

When I researched different medallion quilts it was interesting to see the variation of block patterns that quilters have used in their individual quilts.  Making a decision for my own block was consequently not the easiest decision.  Sometimes I wanted to go the traditional route and other times I so badly wanted to break away from it, but then decided that what I am hopeful for is a traditional style medallion quilt and so that is the route to go.

With that in mind I used 'free time' in the 'home library' to flip through pages of books and magazines that I have.  There were so many block patterns that fit the bill that I then had to narrow it down. 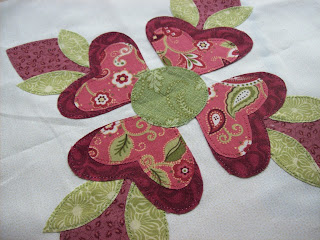 Eventually I decided on a rose of sharon style block and found a really great and easy to follow pattern in The Sampler Quilt Book by Lynne Edwards. 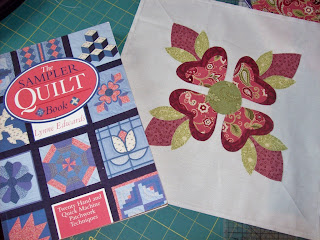 If you look at the book cover you will see that it is the block on the right edge, second one down and next to the 'T' of the word 'Quilt' in the name label of the book. The pattern instructions want you to use turn edge applique to stitch the petals and leaves to it's background, in the traditional fashion.  This is where I've gone off course and done my thing.

Firstly by drawing off the template pieces onto two sided fusible stuff, cut them out roughly, ironed them onto the back side of fabric, cut out the shapes and removed the paper.  I cut out a 13 inch square of backing fabric and folded it to form a triangle, pressed it with a warm iron, folded into the opposite way and gently pressed the second fold.  When I opened it up I had an x running from corner to corner and this allowed me to place the pieces neatly and evenly before pressing them into place.  Then I stitched 1/8th of an inch inside the edge of every leaf and petal, using a colour that more or less matches. 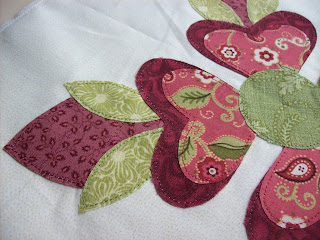 It's not the first time I've done raw edged applique and I'm really liking the technique and its effect.

Before sending it off to the quilter who will add the first border, I decided to select and include some bits of fabric similar in colour as well as left over bits of those used and some of the background fabric which might look white but isn't. 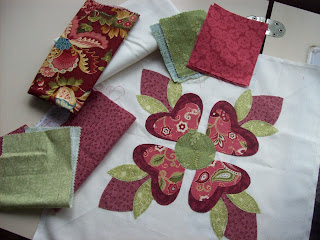 This is the first time I'm involved in anything like this - a quilt that grows while it travels and am very excited.  I'm hoping that those that get to add borders enjoy the creative process.  They're trusting me with their blocks and am really looking forward to doing the first one.
Posted by Wendz at 09:18