It should have been

Wordless Wednesday but I missed the timeslot.  Jeewiz man, how does anyone miss a 24 hour timeslot when you can schedule a picture to pop up ....

I'm in at the deepend doing more training and that is why.  Last year when I started this studying malarky I was given a whole handful of courses to study alongside each other and at the same time and if they had complimented each other directly it would have been easy but they weren't.  Anyway I got through them with a lot of stress and then due to budget constraints the company couldn't place us as they had originally planned.

Nine months later and we're in a new financial year and the budget has changed enough to do some staff shuffling around with some going up the ladder.  I'm lucky enough to be one of those going up the ladder and this move is directly related to the effort I put in.  It has been a very tough year for me and at times I was mentally exhausted.  I've completed 3 different training courses in half the alotted time (11months instead of 22months).  Starting yesterday and running for the next two weeks I'm doing the practical side of one of these.  It does mean going into work on my own time but this time next month it will have been worth it. 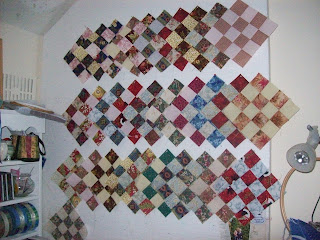 It does also mean that I need to organise my time more efficiently from now on.  Just so that I the sewer in me does not feel neglected I've made some of these 16 patch blocks as I sort and tidy my fabrics.  They're really quick and easy.  Where there is not enough to make strips for these blocks I've cut them into 2 1/2" blocks with a view to making a scrap vomit quilt one day, and if the pieces are smaller then they're in a bird nest somewhere or decomposing in landfill.

Wishing you a great day,
Wendy