When we were children there was one thing you never ever said: "I'm bored" because in no time my parents would find things for us to do. We didn't have television or any of the gadgets that todays' young folk have and in retrospect it was a blessing because we learnt to cook, knit, sew, garden, clean, do laundry, iron and read many many books. As we got older we were allowed to go into the chicken run and collect eggs and we considered it a privilege. Maybe that's why I still feel so chuffed when I'm able to go into a chicken house and fetch eggs without being pecked or herd sheep so they can be dipped and walk amongst horses in a stable. Our 'Townie' friends couldn't do that but we felt hard done by because they had the cinema just down the road and could all get together by just walking a block or two to someone's house or go for a milkshake at the steakhouse.

So with this background I don't find it difficult to get my days to pass quickly and sometimes, maybe, put a little too much on my plate. Right now I'm doing DQS9, am a member of a VQB, have numerous patchwork tops in various stages, tops that are finished and need pinning and quilting, a family, household and garden, a job and now I've decided to and have taken on doing an NVQ. Don't get me wrong, I love, love, love my needlework. It is what charges my batteries and fills my soul. The NVQ is something I've wanted to do for sometime but circumstances have just never allowed for it. Now, I have the opportunity to do it and need to finish it fast tracked. Apparently, you need to spend time at work doing some of the bits and pieces that go into it but our job just does not allow for it timewise so I'm fitting it in at home and obviously for the duration something else will have to give. Instead of dropping one thing I've made the decision to take a little bit of time from each activity and at the end of the day everybody is happy. 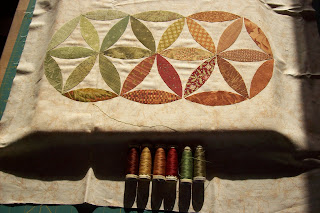 The DQS9 doll quilt is progressing too. After ironing the DQS9 autumn leaves in place it was a pleasure to go shopping for coordinating threads which were then used to stitch the edges down using blanket stitch. 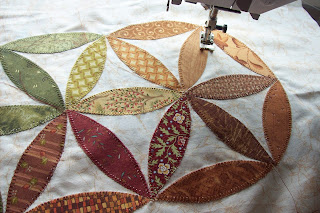 I've decided to quilt it by hand and since it's been some time since I last did hand quilting it's taking time. Some days I get on a roll and then my finger tips get quite sore so it gets put away for a day or two before I pick it up again. The time inbetween is used to catch up on NVQ theory. 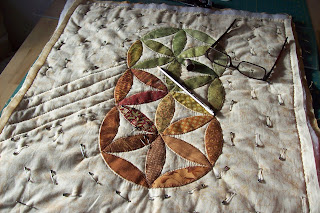 The quilting has actually progressed somewhat since this last picture was taken but I don't have another just yet to post.

Hope you're all keeping busy.
Take care
Posted by Wendz at 11:06