Keeping out of mischief 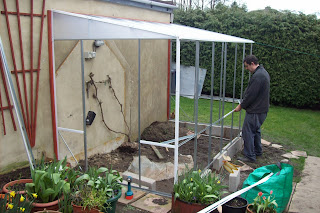 Slowly but surely Enman is making progress. Having a dikky back doesn't help and when he over did it doing the brickwork it meant that building work stood still for almost 3 days. Last night the greenhouse had a roof and by the end of today it had two of the sides in - those that go on either side of the sliding door. I think a good little tweak will have to be some butterfly stickers that can be put on the glass, you know the kind of thing you put on a glass sliding door so you know when the door is open or closed. 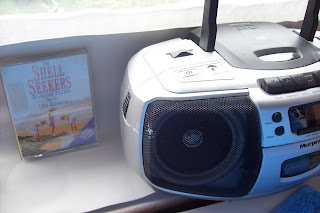 Well, while he was kept occupied I got settled upstairs by popping in cassette no 1 of Shell Seekers and got fiddling. 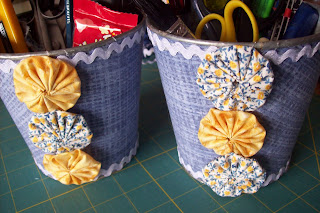 First I want to show you what happened to 2 of 4 galvenised plant pots that I found at a car boot for 20p each. Note the red paper sticking out, well that's my easter egg choc. It's not there anymore :) We have mice in our house that find all the nibbly things and when we look for them they're gone. The mice don't litter though, they throw all the empty wrappers in the dustbin. I suppose that is their way of letting us know that when we look for something to nibble that it's already been enjoyed.

Back to the plant pots: I cut out and glued some carpet underlay inside to create a cushion for the scissors, pens, pencils etc to rest on. Then, using Modge Podge, I glued the fabric to the tins. When that was dry, using the glue gun (for the first time ever) I glued the ric-rac and yoyo's to the seam of the fabric and voila! 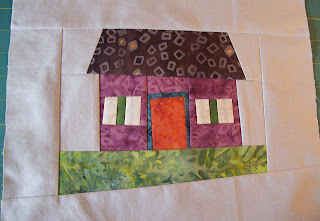 This morning the postman delivered fabrics from Elaine for her blocks. She asked us to make Spring/summer Wonky House blocks and sent lovely bright batiks to make them with. After making the first one we popped out to the local carvery for supper. Their food is always delicious and not expensive either. I'd love to show you how big and scrumptious the plate of three meats and various veggies is but Enman doesn't like me taking photo's in restaurants :( 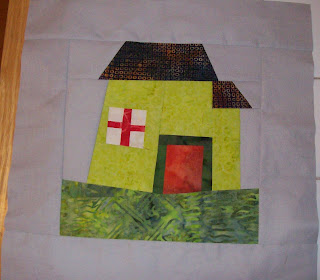 Back home again and still feeling inspired I went straight back to the cutting mat and sewing machine and this is the result. The second wonky house block. Just couldn't resist making the window look like England's flag to remind Elaine (who lives in the USA) that this little house travelled all that way to keep someone warm.

Now, it's time to go and put the kettle on, so until next time,
Take care
Posted by Wendz at 21:24